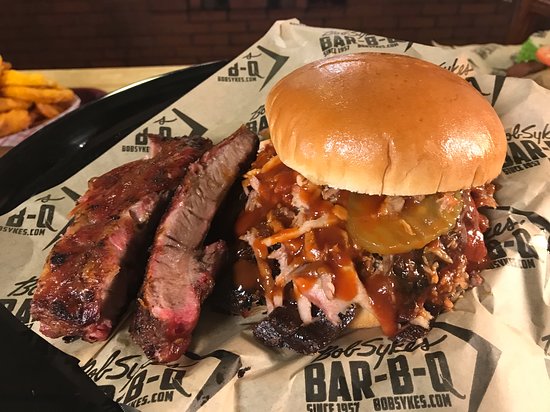 If you’ve ever wandered about how a barbecue restaurant business works and want some tips on cooking up a good meal you’ll probably find out when Van Sykes presents his tour and demo on December 14th at Bob Sykes Bar-B-Q in Bessemer.

Founded by Bob and Maxine Sykes in 1957, Bob Sykes Bar-B-Q has arguably been a staple among barbecue businesses – and Alabama has quite a few of them – with the restaurant being inducted in the Alabama Barbecue Hall of Fame by the Alabama Department of Tourism. It began as a ice cream and hamburger stand, with Bob getting the idea to feature barbecue on the menu inspired from his childhood in Tennessee. Their son, Van Skyes, is now the owner and is a member of the Southern Foodways Alliance. The organization is actually dedicated to exploring and discussing food cultures all throughout the home that we call the Southeast. His restaurant has been featured in various media, including the Travel Channel.

So what’s on the menu? It features much of the same stuff you would probably expect from a place like this, which is pork, beef, ribs, hamburger steak, chicken and combo plates and a whole slew of other meals. But the lemon ice box pie from the original menu has earned the restaurant a reputation that given it a place in news coverage and barbecue books, says Van Sykes’ website.

At Van Syke’s tour and demo, the “pitmaster” himself will be on hand to recount the history of Bob Sykes Bar-B-Q as well as stories of his time working there ever since his parents opened up in Central Park in Birmingham. There will be four rounds for those who sign up for the event. In the first round, Sykes will go over direct fire and heat in the barbecue pit and guests will be offered smoked sausage, a chicken leg and sides of potato salad and onion rings. The second round will have him go over more topics, such as picnic shoulders, spare ribs and sauce. Spare ribs, pork and cole slaw will be offered. In the third round he’ll go over deserts and in the final round, guests can take home a bottle of sauce, a souvenir cup, a gift card and t-shirt.

To buy tickets, visit the Birmingham 365 page, or the Evenbrite page. Tickets are $60 each.